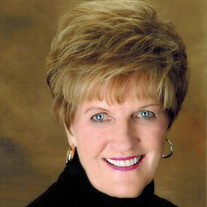 Ann Hollin Smith passed away peacefully on Saturday, August 31, 2019 in London, KY, only 27 days from the passing of cherished husband of 61 years, Dr. Paul Ray Smith, Sr. Ann Smith was born on December 29, 1935, along with her twin brother Jack, in Lynch, Kentucky, which was a booming coal mining community. Ann graduated from Lynch High School where she and Jack were named Miss and Mr. Politician, due to their infectious personalities and smiles. Ann graduated from Cumberland College, studying journalism and education, being the editor of the college newspaper. Ann later earned a Master of Arts degree from Union College. Ann taught school in Lynch and met and married the love of her life, Dr. Paul Smith. After Paul joined the Air Force, they enjoyed traveling for two years before moving to London, Kentucky. Ann was a vital force in the community – serving on numerous committees, local and state boards and being involved in civic and church, while raising her children and being an active participant in their lives. Ann served as President of the Cumberland College Alumni Association, the Commission on Aging and was honored to have been the first female appointed to the Council on Higher Education. She was President of the Kentucky Hospital Association Council on Volunteer Services, President of the London PTA, member of the Advisory Board of Business Department for Laurel County High School, Director of the Laurel Arts and Recreation Council and a member of the Laurel County Business and Professional Woman’s Club. She served on the Sue Bennett Folk Festival as a committee member for eighteen years. Ann was a founding Director and Secretary of the Scott Rose Foundation, an organization near and dear to her heart and she loved helping others in the community have a better life. She served numerous times as President of the Laurel County Medical Auxiliary, was a trustee and later Advisory Board Member for the Laurel County Public Library, as well as an Advisory Board Member of Kentucky Tech in London. Ann was appointed to serve as a Board of Trustee for the Somerset Community College as well as a member of the Judicial Nominating Commission for the 27th Judicial Circuit. Ann was devoted to her church and served as a Sunday School teacher, Board Member, Deacon, Elder and most recently, Elder Emeritus. She became a business owner, President of Ann’s Elegance, Inc., as well as a local travel consultant, a career where she thrived on planning trips and excursions. She fearlessly traveled the world and had a zest for life! She was an expert organizer of events, a prolific fundraiser for organizations, and a gracious hostess who loved entertaining. She had a gift for words and excelled in writing beautiful poems, notes and letters. She had a unique ability to speak and pray articulately and eloquently. She had compassion for all and was the first to reach out to anyone who was grieving or hurt. Ann and Paul cherished their time together with their family – children, grandchildren and siblings - whether it be the decades of family tailgates at the University of KY games, traveling on family trips, or simply celebrating life and making the most of every day. She was predeceased by her parents, Charles and Lucy Hollin, her brothers, Charles Hollin, Robert Hollin and Joe Hollin, her sister Mary Helen Morgan, in addition to her beloved husband. Left to cherish and celebrate her life are her children, Janet Smith Holbrook (Charles R. III), Ann Elizabeth Smith Delahanty, and Paul Ray Smith, Jr. (Linda). She leaves her four grandchildren, whom she adored and they affectionately call her “Gran Ann”, Paul Ray ‘Trey’ Smith III, Zachary Thomas Smith, Jordan Alexander Smith and her namesake granddaughter, Ann Hollin Smith Delahanty. Ann is survived by three of her siblings, Sally Spurlock, Taylor Hollin and her twin, Jack Hollin; and a host of nieces, nephews, and Sisters-in-law. Ann treasured her dear friends; Sweetie Smith, Carolyn Lawson and Judy Rose. Visitation will be Saturday, September 7, 2019 from 10:00 a.m. to 12 noon at First Christian Church, London with a celebration of life service beginning at 12 noon with Pastor Jonathan Carmack officiating. There will be a joint burial at A. R. Dyche Memorial Park for both Paul and Ann Smith. The family would like to thank the staff and residents of Village Heights and Laurel Heights for their love and support. In lieu of flowers, the family asks for contributions in memory of Ann Hollin Smith to First Christian Church, 303 N. Main Street, London, KY, 40741, or because her beautiful smile could light up a room, honor her memory by smiling at a stranger and being kind to others. London Funeral Home is in charge of all arrangements.

Ann Hollin Smith passed away peacefully on Saturday, August 31, 2019 in London, KY, only 27 days from the passing of cherished husband of 61 years, Dr. Paul Ray Smith, Sr. Ann Smith was born on December 29, 1935, along with her twin brother... View Obituary & Service Information

The family of Ann Hollin Smith created this Life Tributes page to make it easy to share your memories.

Send flowers to the Smith family.