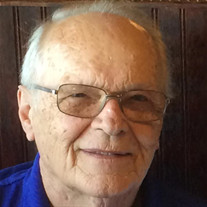 Click Here to View Livestream of Service Robert Bruce Yandell of London, KY, known as Bruce by all his friends and family, passed from this life to his heavenly reward on April 10 in Louisville, KY. Born on January 8, 1940, in London, KY, to Isabel and Vernon Yandell, Bruce was the loving husband of fifty-nine years to Judy Saunders Yandell, formerly of Louisville. He spent all of his formative years in London, with a brief interlude in Plainfield, IN, in his late teens. He graduated from London High School, attended Sue Bennett College and later Georgetown College where he met the love of his life, and graduated from Cumberland College with a BS in business administration. During his interim spells between colleges, he served in the US Army three years as a medic, married and began a family. After residing in Louisville and then Lexington during his early years of marriage, he returned to his London hometown where he continued his professional life in the insurance field, but then spent the major part of his career as a pharmaceutical sales representative. He has served on London city council, board of adjustments, and planning and zoning board for many years, and was a strong supporter of the World Chicken Festival, acting as president of the board for ten years. As a longtime faithful member of First Baptist Church, he could have been found in many different roles through the years: Sunday School teacher, choir member, deacon, greeter, church moderator, gardener, and committee member to name a few. His ready smile and gentle nature testify to his Christian faith and values. His advice to anyone has been to love God, family, and country, all in that order. Since his retirement in 1996 from Parke Davis/Warner Lambert, Bruce has enjoyed yard work, TV and computer programs, whittling, civic and church activities, time with friends, travel, and leisure activities with his family. Retirement also afforded him greater opportunity to share his love of fishing and interest in history with his grandchildren, who lovingly refer to him as Granddad. Bruce was preceded in death by both parents, Roy Vernon Yandell and Isabel Walker Yandell Douglass. Surviving him are his wife, Judy, three daughters, Cheryl Adkisson (Ron) of Prospect, KY, Becky Kearns (Roger) of Houson, TX, and Vicki Shimko (JJ) of Williamsport, PA, and nine grandchildren, Michael Adkisson of Orlando, FL, Kaitllyn Adkisson Crawley (Tyler) of Louisville, KY, Jared Kearns of Tokyo, Japan, Aaron Kearns and Morgan Kearns of Houston, TX, and Makenzie Shimko, Caleb Shimko, Jonathan Shimko, and Abby Shimko of Williamsport, PA, several cousins and a host of friends. Funeral services will be held Tuesday, April 20 at 2 p.m. at London Funeral Home with visitation on Monday evening, April 19, 4-8 p.m. The service will also be available via Livestream. Pallbearers will be Michael Adkisson, Jared Kearns, Tyler Crawley, Aaron Kearns, Caleb Shimko, and Jonathan Shimko with the deacons of First Baptist Church as honorary pallbearers. Burial will follow in the A.R. Dyche Cemetery with DAV Chapter 158 Keavy in charge of military honors. In lieu of flowers, the family requests that memorial donations be made to First Baptist Church, or Kentucky Baptist Convention Disaster Relief, or Colonial Williamsburg Foundation. All families respectfully request that all visitors wear a face covering and adhere to social distancing recommendations.

[Click Here to View Livestream of Service]https://view.oneroomstreaming.com/authorise.php?k=1618877126111462 Robert Bruce Yandell of London, KY, known as Bruce by all his friends and family, passed from this life to his heavenly reward on April... View Obituary & Service Information

The family of Bruce Yandell created this Life Tributes page to make it easy to share your memories.

Send flowers to the Yandell family.