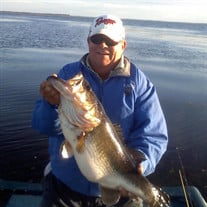 Charles Beatty of New Palestine, Indiana passed away October 25, 2021 at the age of 73 with his hands being held by his two sons. He was born July 12, 1948 in Oneida, Kentucky to the late Archie T. and Myrtle (Brown) Beatty. After having to leave High School at the age of 16 to begin his family, he went back to night school to finish his education – if he started anything, he was going to finish it. Charles worked many jobs in his early years, from picking tobacco, working in a grocery store to managing a car wash. After leaving Kentucky for Indianapolis he worked at Uniroyal Rubber Company, filled vending machines, and drove a cab to support his family. He hired on at International Harvester in 1972 where he worked for 31 years before retiring on July 31, 2003. Charles’ life was centered around his family – coaching sports, teaching respect and hard work ethics; never accepting anything less than our best efforts. He shared a few of his biggest passions with his sons (and anybody who would listen J): UK basketball and fishing! When it came to fishing, Dad taught us everything we know… just not everything he knew. Charles loved life and all those in his life – if you won Charles over, he’d go to the ends of the Earth for you. All who knew him either loved or respected him. He didn’t do anything halfway – if Charles was going to do it, he was going to try to be the best. Charles was known by many names – Old Man, Big Guy, CB, Charlie, Charles, Chas, Grandpa, GPa and GGPa; but most of all…he was Dad. ALWAYS there for us. Charles is survived by his two sons: Charlie (Dee) and Jeff (Chris), Grandchildren: Anthony (Lacey), Tiffany, Christopher, Tyler, Jake; Great Grandchild: Arya. Brothers & Sisters: His oldest brother and best friend Roy (Vanda), Nadine Jackson, Bill (Patricia), Diana (Earl) Philpot, John Thomas and Clara Grace (Steve) Neal. He was preceded in death by his parents and two of his sisters: Donna Sue Parker and JoAnn Pettitt. A Memorial Gathering will be held Wednesday, November 3rd from 4 – 6PM at Flanner Buchanan – Washington Park East, 10722 E. Washington St, Indianapolis. A Celebration of his life will begin at 6PM. As Dad always wanted to take care of his family, his sons would like to request any memorial contributions be made to his niece, Janet Reid. Her oldest son, dad’s 1st great nephew, Amos Jared has Acute Lymphoblastic Leukemia. Please make donations payable to Janet Reid and mail to Flanner Buchanan – Washington Park East to assist with their medical expenses. This obituary is a courtesy of London Funeral Home.

Charles Beatty of New Palestine, Indiana passed away October 25, 2021 at the age of 73 with his hands being held by his two sons. He was born July 12, 1948 in Oneida, Kentucky to the late Archie T. and Myrtle (Brown) Beatty. After having to... View Obituary & Service Information

The family of Charles Beatty created this Life Tributes page to make it easy to share your memories.

Send flowers to the Beatty family.