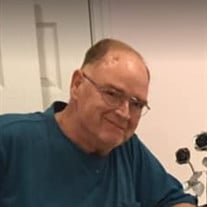 Charles Edwin Lillard, age 65, husband of Debra Lillard of London, Kentucky passed away Friday, November 27, 2020 at Saint Joseph London Hospital. He was the father of Shawn Lillard and wife Lisa of Cerulean, Kentucky; the step-father of Jenny Reynolds and husband Tim of Gaffney, South Carolina, and Joey Hemenway and wife Nicki of Elk Mound, Wisconsin; the brother of Patty Pipper and husband Frank of Monmouth, Illinois, Kelly Lillard of Surprise, Arizona, and Lori Russel of Stronghurst, Illinois. He was the grandfather of Brittany Randolph, Aubrey Lillard, and Austin Lillard; and the step-grandfather of Sam and Drew Hemenway. He also leaves behind a special aunt, Judy Bielser. He was a loving husband, father, and grandfather, a truck driver for Walmart, an auto restorer, and was well known for his woodworking skills. He was preceded in death by his parents, Cal and Mary (Smith) Lillard, and by his first wife, Carol (Williamson) Lillard. Memorial services for Charles Edwin Lillard will be held at a later date. London Funeral Home is in charge of all arrangements.

The family of Charles Edwin Lillard created this Life Tributes page to make it easy to share your memories.

Send flowers to the Lillard family.