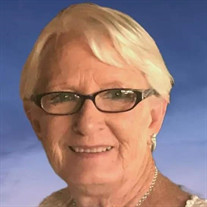 Doris Evelyn Byrne, age 74, wife of Herbert Gregory Byrne of Indianapolis, Indiana passed away Friday, January 7, 2022 at her residence. She was the sister of Stanley Ray McQueen and wife Loraine of Lily, Kentucky, Brenda Elaine Combs and husband Wayne, Glenn McQueen and wife Marilyn, and Jeffery McQueen and wife Dianna all of East Bernstadt, Kentucky, Linda Herndon and husband Lonnie, Debra Robbins and husband Kenny, and Terry McQueen and wife Sonya all of London, Kentucky; the step-mother of Sherry Agan and husband Dan of Indianapolis, Indiana. She was also blessed with two grandchildren, Justin Gaines and Braden Tilford both of Indianapolis, Indiana. She was preceded in death by her son, Shawn Neil Gaines; by her parents, George and Dorothy (Gill) McQueen; by her sister, Edith Conner; by her step-children, Jimmy Byrne and Robert Byrne. She is also survived by a host of nieces, nephews, and relatives to mourn her passing. Funeral services for Doris Evelyn Byrne will be conducted Saturday, January 15, 2022 at 2:00 p.m. in London Funeral Home Chapel with Brad Wilson officiating. Burial will follow at Ball-McQueen Cemetery. The family of Doris Evelyn Byrne will receive friends at London Funeral Home from 12:00 noon until the time of service on Saturday, January 15, 2022. Serving as pallbearers will be: Joel McQueen, Dustin McQueen, Brian Robbins, Brad Herndon, Roger Grimes, and Braden Tilford. Honorary pallbearers will be: Mark Pruitt and Calvin Williams

The family of Doris Evelyn Byrne created this Life Tributes page to make it easy to share your memories.

Send flowers to the Byrne family.