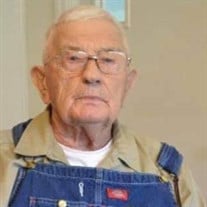 Finley Baker, age 95, of Keavy, Kentucky passed away Monday, October 12, 2020, at Baptist Health Corbin. He was the father of Owen Baker and Wilma Jackson both of Keavy, Kentucky, Odis Baker, Ova Baker, Arvil Baker, and Arlie Baker all of London, Kentucky; the brother of Polly Jane Sizemore, Orie Baker, Rufus Baker, and Felix Baker all of Keavy, Kentucky, Farmer Baker of Indiana, Henderson Baker and Burchel Baker both of London, Kentucky. He was also survived by fifteen grandchildren, twenty-seven great grandchildren, and four great great grandchildren. He was preceded in death by his wife Evelyn (Lewis) Baker; by one son, Bill Baker; by one daughter, Eula Mae Gibson; by his parents, Rueben and Ollie Baker; and by his siblings, Henry Baker and Forester Baker, Sr. He was a World II Veteran of the United States Army and member of Chestnut Ridge Church of Christ of Mt. Vernon, Kentucky. Private graveside services and burial for Finley Baker will be conducted at Baker Family Cemetery with Clayton Baker officiating. There will be no visitation. London Funeral Home is in charge of all arrangements. Serving as pallbearers will be: Owen Baker, Odis Baker, Ova Baker, Arvil Baker, Arlie Baker, and Jamie Jackson.

The family of Finley Baker created this Life Tributes page to make it easy to share your memories.

Send flowers to the Baker family.