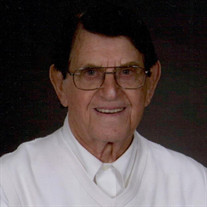 George Humfleet, age 96, of London, Kentucky passed away Friday, September 25, 2020 at his residence. He was the father of Kay Mullins and husband Craig; the grandfather of Staci Jackson and husband Chris and Brandon Mullins all of London, Kentucky; the brother of Rosalie Humfleet of London, Kentucky, and Johnny Humfleet of Louisville, Kentucky. He is also survived by a special niece, Sue Wright and husband Roger and by a special nephew, Mike Humfleet and wife Janice all of London, Kentucky, and by Louise Martin and Hazel Brock who are like a member of the family. He was preceded in death by his loving wife, Mildred (Baker) Humfleet; by his parents, John and Rosa (Carmack) Humfleet; and by his siblings, Preston Humfleet, Kathleen Emery, Bertha Bennett, Ray Humfleet, Mavis Smith, William Eugene Humfleet, Ercel Humfleet Nolan, and Edna Furbee. He was a faithful member of First Baptist Church of London, where he especially had a heart for the children and youth ministry, he was a graduate of Lily High School and Sue Bennett College. In 1954 George Humfleet was franchised by Ford Motor Corp to sell Mercury automobiles, which he continued until 1962. He then sold used cars at his business on Hwy. 25 North, Humfleet Motor Sales. Beginning in 1968 and running over 20 years was the George Humfleet Mobile Home Show on WFTG with George and his #1 salesman Charlie Harrison. In 1962 he opened a wholesale auto auction called the Dixie Auto Auction. In 1969 George opened George Humfleet Mobile Homes beginning with only 4 homes in stock. Last year he celebrated the 50th year for George Humfleet Homes with a huge anniversary celebration. He couldn't believe that many people came out. It was a great day for George as he was smiling all day. Up until the last 2 years George was at his office almost everyday. He made many good friends there that still come by and want to speak to George. He is past president of the Kentucky Manufactured Housing Institute and served several years on the state licensing board for manufactured housing. George served on the Board of Directors at First National Bank of London from 1981 until 2010, was a member of the Kiwanis Club, and in 1994 he was presented the Laurel County Homecoming Lifetime Achievement Award. The family would like to extend a special thank you to Tom Bowden and to his caregivers, Hazel, Glennie, Miranda, and Darlene. Private graveside services and burial for George Humfleet will be conducted at A. R. Dyche Memorial Park with Gregg Curtis and Bobby Mullins officiating. Due to Covid-19 and family illness there will be no visitation or funeral service. Memorial service for George Humfleet will be at a later date at First Baptist Church of London. London Funeral Home is in charge of all arrangements.

The family of George Humfleet created this Life Tributes page to make it easy to share your memories.

Send flowers to the Humfleet family.