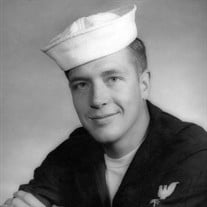 Herman Delbert Jones, age 89, of London, Kentucky, passed away Monday, May 18, 2020 at Laurel Heights Home for the Elderly. He was the father of Brooks Jones and wife Vicki, and Brad Jones and wife Robin all of London, Kentucky. He was also blessed with four grandchildren, Keegan Jones of Austin, Texas, Logan Jones and wife Brittany of London, Kentucky, Lynsi Kilburn and husband Darawn of East Bernstadt, Kentucky, and Landon Jones and wife Lindsay of Fort Sill, Oklahoma; by four great grandchildren, Konnor Kilburn, Khloe Kilburn, Jack-Brooks Jones, and Willow Grace Jones; and by a host of nieces, nephews, and cousins. He was preceded in death by his wife, Diane (Draper) Jones; by two daughters, Denise Jones and Angela Jones; by his parents, John Burton Jones and Martha Ann Jones; and by his siblings, Loretta Keller, Edith Weakley, and Odus Jones. He attended First United Methodist Church of London, Kentucky, was a Veteran of the United States Navy where he served in the Korean War, and a railroad conductor. There will be no services for Herman Delbert Jones. In lieu of flowers the family request memorial contributions be made to: First United Methodist Church Fellowship Hall Fund, 301 West 5th Street, London, KY 40741. London Funeral Home is in charge of all arrangements.

The family of Herman Delbert Jones created this Life Tributes page to make it easy to share your memories.

Send flowers to the Jones family.