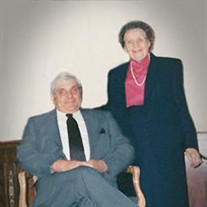 Hiram (Gig) Cornett, age 96, of London, Kentucky passed away Friday, January 17, 2020 at Laurel Heights Home for the Elderly. He was father of Tommie Lou Walden and husband Glae of London, Kentucky, and Sandy Baxter of Venice, Florida; the brother... View Obituary & Service Information

The family of Hiram (Gig) Cornett created this Life Tributes page to make it easy to share your memories.

Send flowers to the Cornett family.