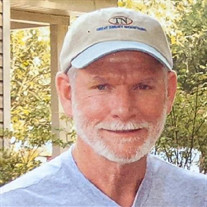 James Lamar Abernathy, age 74, of Williamsburg, Kentucky, passed away on January 7, 2022. He was born in Adairsville, GA on October 3, 1947, son of Elihue Abernathy and Zonnia Paris-Abernathy. Husband to Pam Abernathy for 49 years. Lamar was preceded in death by his parents, and brother Ronald Abernathy. Survivors include his loving wife Pam, daughter Christy, son Joshua (Shawn), son Michael (Kaleigh). His sister Carolyn Hayes (Lamar), brothers Lynn Abernathy (Daphne), Kenneth Abernathy (Anna), Jeffrey Abernathy (Jodie). Also included are his grandchildren, Lauren Griffin (Justin), Jon Little, James Little, Morgan Evans (Ethan), Hailey Kellim (Alex), Katy Abernathy, Juliyah Abernathy, Sariyah Abernathy, Eliyah Abernathy, Arianah Abernathy, Micah Abernathy, Josiyah Abernathy, and great grandchildren, Bethany Griffin and Levi Kellim. Lamar grew up in Adairsville, GA where he remained for most of his life. He was a gifted painter by trade who took pride in the quality of his work. He was very devoted, and an outstanding example of what a great husband, father, and papa should be. Lamar will be remembered for his exceptionally unfailing Faith, of which he engrained into his children and grandchildren. He lived his life with morals and values, compassion for others, and immense love for each and every family member, friend, and even strangers. His moto was "we are all made unique and special." Lamar loved spending quality time with his wife, children, and grandchildren. He enjoyed spending time on hunting trips, four wheeling, camping, hiking, gardening, anything with nature, with any and all of his family, friends or anyone who would do these adventures with him. This included the many, many antique shopping trips he would make with his wife, and all the ladies in the family. Along with their husbands who (most of which) resorted to remaining outside sitting on a bench or in cars all talking together. Lamar loved to laugh and enjoyed joking around. He would crack up all the kids with his Donald duck impression and other funny animal noises, bringing a smile every time. He would even make those sounds walking around a store and watch as little kids (even adults) would turn and either smile or have a puzzled look! He would get such a kick out of it... He loved talking and spending conservational time with his loved ones and his Heavenly Father. His daily prayer walks were so important to him! He would take time everyday during these walks on each family member, praying over them individually. All of Lamar's family and friends will miss him so very much. There is a void without Lamar, but his memories will live on, etched deeply in our hearts and minds until we see him again! Funeral services for James Lamar Abernathy will be conducted Thursday at 1:00 p.m. in London Funeral Home Chapel with Pastor Ray Cowan and Pastor Jay Ledbetter. Burial will follow at Jackson Family Cemetery. There will be no visitation. In lieu of flowers the family request memorial contributions be made to: Your local food bank or Battered Women and Children Shelter.

James Lamar Abernathy, age 74, of Williamsburg, Kentucky, passed away on January 7, 2022. He was born in Adairsville, GA on October 3, 1947, son of Elihue Abernathy and Zonnia Paris-Abernathy. Husband to Pam Abernathy for 49 years. Lamar was... View Obituary & Service Information

The family of James Lamar Abernathy created this Life Tributes page to make it easy to share your memories.

Send flowers to the Abernathy family.