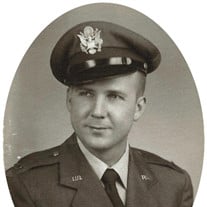 John Benjamin Moren, 91, passed away September 18, 2021. He resided in Shadow Hills, CA at the time of his passing. John was born January 18, 1930 to John D. and Della Moren. He was the youngest of 6 children. He is survived by his daughter, Kelly Moren, and his granddaughter, Kelsey Moren-Callabresi. He graduated from Hazel Green High School in 1948 and attended Sue Bennett Jr. College and the University of Kentucky where he received a BS in Electrical Engineering in 1954. Captain John B. Moren served in the Air Force from 1954-1980 and was a member of the first generation of Air Force Missileers who are no part of the Space Force. His career spanned both the Vietnam and Cold Wars. John Received a total of 19 decorations during his career, flying over 100 missions. He was awarded the Distinguished Flying Cross, and the Air Medal on four separate occasions, in addition to Eight National Defense Service Ribbons. When he retired, he was awarded the Meritorious Service Medal. After retiring from the Air Force, he continued the Aerospace work with Martin Marietta Aerospace and Lockheed Space Operations as Lead Engineer for the Launch Pad for the Space Shuttle. John's specialty was in electronic maintenance of the missile systems. He worked on the Minuteman and Titan III. He had the historical and rare opportunity to see ballistic systems be created and deployed. His contributions to our national defense, the Air Force's success in developing the systems and the forwarding of air defense technology is his legacy. John married Judy Faye Yoemans (died 11/14/99) on February 20, 1965 and Kellylynn Moren was born on November 27, 1967. John joined the Vandenberg Saddle Club when he purchased a Shetland Pony for his daughter, Kelly. He became one of the longest members of the club, retiring from Club Treasurer in 2017 after 40 years of membership. His greatest joy was watching in person his granddaughter, Kelsey, ride his beloved Missy's colt, Cody in the Rose Parade on New Year's Day 2020 with the Blue Shadows Mounted Drill Team parade unit. He owned many shelter dogs and loved all animals deeply. He enjoyed RV-ing, boating, and tinkering on his cars. He lived a full life, enjoying time spent with his daughter and granddaughter, passing on his love of horses and the importance of family. Graveside services and burial for John Benjamin Moren will be conducted Saturday, October 9, 2021 at 1:00 p.m. at A.R. Dyche Memorial Park with Matt Johnson officiating. The family of John Benjamin Moren will receive friends at London Funeral Home from 11:00 a.m. until 12:45 p.m. on Saturday, October 9, 2021. Serving as pallbearers will be family and friends.

John Benjamin Moren, 91, passed away September 18, 2021. He resided in Shadow Hills, CA at the time of his passing. John was born January 18, 1930 to John D. and Della Moren. He was the youngest of 6 children. He is survived by his daughter,... View Obituary & Service Information

The family of John Benjamin Moren created this Life Tributes page to make it easy to share your memories.

Send flowers to the Moren family.