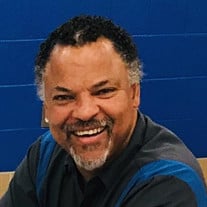 John David Riley, age 54 husband of Lisa (Taylor) Riley of London, Kentucky passed away on Tuesday,December 17, 2019 at UK Medical Center in Lexington, Kentucky, He was the father of John Christopher Riley of Bowling Green, Kentucky, and the... View Obituary & Service Information

The family of John David Riley created this Life Tributes page to make it easy to share your memories.

Send flowers to the Riley family.