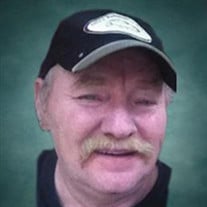 Larry E. “Hollywood” Ballinger, age 63, husband of Irene (Brewer) Ballinger of Corbin, Kentucky passed away Thursday, August 27, 2020 at Baptist Health in Corbin, Kentucky. He was the father of Larry Ballinger, Jr., and James Ballinger both of Corbin, Kentucky, Angela Schafer of East Bernstadt, Kentucky, and Heather Maxie of Somerset, Kentucky; the brother of Marsha McPhearson of Dayton, Ohio, Debra Cash of Sidney, Ohio, and Michael Ballinger of Pittsburg, Kentucky. He was also blessed with fifteen grandchildren and one great grandchild. He was preceded in death by his parents, Everett and Lucy (Boshears) Ballinger; by his daughter, Melissa Ballinger; and by his sister, Robyn Peters. Funeral services for Larry E. “Hollywood” Ballinger will be conducted Monday, August 31, 2020 at 6:00 p.m. in London Funeral Home Chapel with Carmon Brewer officiating. The family of Larry E. “Hollywood” Ballinger will receive friends at London Funeral Home from 3:00 p.m. until time of service on Monday, August 31, 2020. In lieu of flowers the family requests memorial contributions be made to: London Funeral Home toward funeral expense.

The family of Larry E. "Hollywood" Ballinger created this Life Tributes page to make it easy to share your memories.

Send flowers to the Ballinger family.