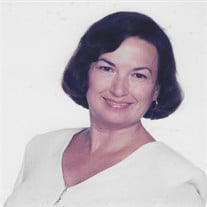 Melba Joyce Reynolds Wolfe passed from this life on November 7, 2019 at her home in Longwood, Florida surrounded by her loved ones. She was born November 29, 1941 to the late Hughes and Ora Mae (Arthur) Reynolds. Melba is survived by her husband, James Russell "Jim" Teter, one daughter and son-in-law Amber Wolfe DeMorse and Danny, one grandson Cameron DeMorse, and one granddaughter Kylie DeMorse, all of Longwood, Florida. Also surviving are two brothers, Kenton and Kevin (Karen) Reynolds of London, Kentucky., three sisters, Lillian (James) Reed of Lawrenceville, Georgia, Brenda (Ronnie) Blanton of London, Kentucky, and Sandra (Denny) MCCowan of East Bernstadt, Kentucky. Melba was preceded in death by her first husband and father of their daughter, Jack Wolfe in 1993. Also precededing her in death were two brothers, Doyle and Oscar Reynolds and one sister Vivian Renner. Melba became a Christian at an early age and was affiliated with the Baptist Church. Her life was an example for all who knew her. She always saw the good in people and judged no one. Her kindness was a shining light to her family and friends and was reflected in all she did. Melba would tell you that her greatest accomplishment in life was her daughter, but her compassion and wisdom was extended to all and she touched many lives through the years. She retired from Sprint as Director of Engineering after 32 years service. With her passing, a beautiful light has been extinguished from this earthly realm which will leave an empty spot in our hearts, but we rejoice in the assurance that she has entered the peace of her heavenly reward. Funeral services for Melba Joyce Reynolds Wolfe will be conducted Thursday at 1:00 p.m. in London Funeral Home Chapel with Denny McCowan and Roger Wolfe officiating. Burial will follow at Arthur Cemetery. The family of Melba Joyce Reynolds Wolfe will receive friends at London Funeral Home from 11:00 a.m. until the service time on Thursday. Serving as pallbearers are Cameron DeMorse, Josh Reynolds, Jason McCowan, Jason Wolfe, Kyle Wolfe and Tim Renner. Wolfe and Sons Funeral Home, Hyden, Kentucky is in charge of all arrangements.

Melba Joyce Reynolds Wolfe passed from this life on November 7, 2019 at her home in Longwood, Florida surrounded by her loved ones. She was born November 29, 1941 to the late Hughes and Ora Mae (Arthur) Reynolds. Melba is survived by her husband,... View Obituary & Service Information

The family of Melba Joyce Reynolds Wolfe created this Life Tributes page to make it easy to share your memories.

Melba Joyce Reynolds Wolfe passed from this life on November...