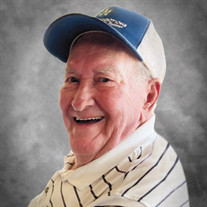 To View Livestream of Paul's Service Click Here Paul Boggs, 88, of London, went to meet his Lord and Savior on Feb. 10, 2022 . As he walked through heaven's gates he was met by both his momma and his wife of 57 years. His passing will leave a void that will never be filled but we rejoice in knowing that he fought the good fight, he finished his course and he kept the faith. His prayers have been answered, his race has been won and he is rejoicing in the victory of the Glory of Lord. Paul was born May 22, 1933, in Laurel County to the late Lawrence and Mary Messer Boggs. He served in the United States Army during the Korean War. 11 years after returning home he met the love of his life and the one that would drive him crazy for the next 47 years. Their only son was born in 1965, however they opened their hearts and home up to a beautiful baby girl that they raised as their own. Once grandchildren and great grandchildren came there was another chance to shower beautiful babies with all the love that their hearts could hold. Paul was a man that liked to stay busy, he had a passion for planting a garden in the spring, fishing in the summer and busting walnuts all winter. He enjoyed this time and shared the fruits of his labor with his friends and family. Paul held a special place in his heart for all his brother and sister n laws and for his special friends Henderson and Becky Baker. He loved and was loved by numerous nieces and nephews. Whether they knew him as "Cousin" Paul, "Aunt" Paul or his true title Uncle Paul there was never a doubt that you were loved. He was always ready to offer a fishing trip to his nephews or a hard time to those beloved nieces. The impact he had on the lives of the younger generation is beautifully summed up in the following letter given to him from his grandson Bailey Fultz: I have never been good at expressing things out loud or in person, but there's no chance I won't make sure that you understand the love, gratitude, and respect I have for you. I have watched you for years work from before the sun is up to past it being down. I have watched you take care of everyone with kindness, forgiveness, gratitude, and graciousness. I have watched you because one day I hope to be half the man you are. Thank you for taking care of my mom all this time, thank you for taking care of us. For everything you've done, from sharing your banana pudding and dumplings with me and making me oatmeal or roast. I love you and appreciate you. I will never see you as just a great uncle, I will always see you as a papaw and my biggest role model. Keep fighting until you can't anymore, I love you and am so thankful for you." Paul was preceded in death by his wife Kay Johns Boggs and his father and mother Lawrence and Mary Messer Boggs. His brothers Walter, LH, Dave and Ralph Boggs. Sisters that went on Before him were Irene Zbanzick, Florence Rudder, May Grooms. He is survived by his sisters Nancy Doris Tucker, and Ann Adams. He also leaves his son Doug Boggs and wife Donna, Daughter, Angie Fultz and Shane. Grandchildren Ashley Trosper, Amber Boggs, Courtney Bowling, Bailey Fultz, Isabella Fultz, Ellie Herring, Ben Trosper and Jon Cox. Great-grandchildren Gabe Bowling, Eli Trosper, Colton Cox and Thea Cox. Funeral services for Paul Boggs will be conducted Monday, February 14, 2022 at 2:00 p.m. in London Funeral Home Chapel with Bro. Glenn Wilson, Pastor Randell Lee, and Bro B.J. McKinney officiating. Burial will follow at Old Union Cemetery with DAV Chapter 158 Keavy in charge of military honors. The family of Paul Boggs will receive friends at London Funeral Home from 12:00 noon until the time of service on Monday, February 14, 2022. Serving as pallbearers will be: Ben Trosper, Sr., Jeff Zbanzick, Tony Zbanzick, John Cox, Jimmy Boggs, Carl Pennington, Shane Fultz, Bailey Fultz, Gabe Bowling, Jeremiah Vaughn, Shane Wagers, and Ben Trosper, Jr.

The family of Paul Boggs created this Life Tributes page to make it easy to share your memories.

Send flowers to the Boggs family.