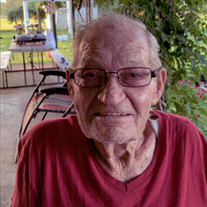 Robert &#8220;Bob&#8221; McCollum, age 79, of East Bernstadt, Kentucky passed away Saturday, October 24, 2020 at his residence. He was the father of Jamie McCollum of Corbin, Kentucky, Carol McCollum, and Donna Houston and husband Jason all... View Obituary & Service Information

The family of Robert "Bob" McCollum created this Life Tributes page to make it easy to share your memories.

Send flowers to the McCollum family.