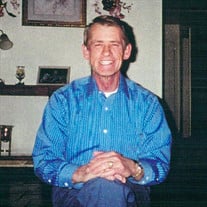 Theodore “Ted” Combs, Jr., age 72, husband of Christine (Smith) Combs of Corbin, Kentucky passed away Tuesday, October 20, 2020 at his residence. He was the brother of Doris Parrish, Dorothy Hubbard, and Loretta McFadden all of London, Kentucky, and Vida Kewin of St. Charles, Illinois; the step-father of Christie May and husband Tilden of Danville, Kentucky. He is also survived by two step grandchildren, Christopher Asher and Cooper Asher both of Danville, Kentucky. He was preceded in death by his parents, Theodore Combs, Sr., and Beatrice (Proffitt) Combs; and by his brother, Kelvin Hubbard. He was an Army veteran an was in the 27th Infantry Regiment, nicknames the "Wolfhounds:, is a regiment of the United States Army established in 1901, that served in the Philippine- American War, in the Siberian Intervention after World War I, and as part of the 25th Infantry Division. He also served in Vietnam from July 1968 to July 1969. During his time in the Army he received Army Commendation Medal w/V Device; National Defense Service Medal; Vietnam Service Medal: Republic Vietnam Campaign Medal w/Device 1960; Combat Infantryman Badge; Marksman Rifle M-14;. All services for Theodore “Ted” Combs, Jr. will be private in London Funeral Home Chapel with Kenny Day officiating. Burial will follow at Cumberland Memorial Gardens with DAV Chapter 158 Keavy in charge of military honors. In lieu of flowers the family requests memorial contributions be made to: support.woundedwarriorproject.org. Serving as pallbearers will be: Keith Parrish, Kevin Parrish, Terry Hubbard, Robbie McFadden, Michael Holt, and Shannon Craft.

Theodore &#8220;Ted&#8221; Combs, Jr., age 72, husband of Christine (Smith) Combs of Corbin, Kentucky passed away Tuesday, October 20, 2020 at his residence. He was the brother of Doris Parrish, Dorothy Hubbard, and Loretta McFadden all of London,... View Obituary & Service Information

The family of Theodore "Ted" Combs Jr. created this Life Tributes page to make it easy to share your memories.

Send flowers to the Combs family.