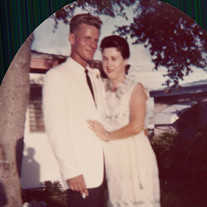 Troy Elliott, age 91, of London, Kentucky passed away Thursday, August 27, 2020 at Baptist Health in Corbin, Kentucky. He was the father of Robin Elliott and wife Joy of Lamonte, Missouri and Jill Mullins and husband David of Danville, Kentucky;... View Obituary & Service Information

The family of Troy Elliott created this Life Tributes page to make it easy to share your memories.

Send flowers to the Elliott family.