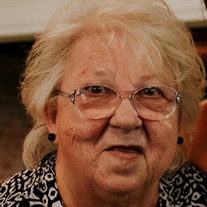 Click Here to View Livestream of Service Wilma Johns Gadd Eaton, 71, of London, entered Heaven's gates on March 30th, 2021, where she ran into the arms of Jesus and loved ones that had gone before her. We find peace in knowing she had a joyous reunion walking the streets of gold with her heavenly family. We grieve her loss but take comfort in knowing that she and Eddie were reunited. Wilma was born in Laurel County, KY, on October 7th, 1949, to the late John Henry and Bessie Bryant Johns. At the age of 19, she met her soul mate and love of her life, the late Paul Edward "Eddie" Gadd Jr., married, and had three daughters. Wilma was a wife, mother, grandmother, great-grandmother, sister, aunt, and friend to many. Wilma loved and protected her children and grandchildren fiercely. She loved telling jokes and was the world's #1 prankster. When in her presence, she always made sure of two things: that you were laughing and that your belly was full. In her later years, Wilma blessed Gene Eaton's life, becoming a wonderful wife and companion, filling his life with love and laughter until his passing. Wilma left behind her daughters, Barbara Wombles and husband Roy, Paula Gadd and Randall Stewart, and Jennifer Taylor and husband, Luke. She is also survived by her grandchildren Lauren Taylor and husband Caleb, Jordan Gadd and Maryann Pace, Dakota Taylor, Brianna Brown and husband Alan, Landon Wombles, Ethan Taylor, Brinlee Stewart, and Jace Taylor. She was blessed with four great-grandchildren: Tyson Gadd, Zoey Taylor, Rhett Brown, and Lily Rae Taylor. Her surviving sisters Christine Brock and husband Larry, Patricia Wagers and husband Paul, and baby brother John "JR" Johns and wife Anna. Her "crazy" bunch of nieces and nephews will miss all the laughter, food, pranks, unconditional love, and forgiving heart that she shared with everyone. A host of other family and friends mourn her passing. Her sister-in-law Barbara Gadd Noe and husband Charlie held a special place in her heart and will miss her dearly. She was preceded in death by her brothers Bobby Johns, John Will Johns, Pleas Johns, Jimmy Johns, and her sisters Nellene Johns, Gearldine Marcum and Kay Boggs. The family will receive friends and loved ones at 1:00 P.M. Tuesday, April 6th at London Funeral Home. Funeral services officiated by Pastor Brad Parrett will begin at 3:00 P.M. followed by burial at A.R. Dyche Memorial Park.

[Click Here to View Livestream of Service]https://view.oneroomstreaming.com/authorise.php?k=1617744573109320 Wilma Johns Gadd Eaton, 71, of London, entered Heaven's gates on March 30th, 2021, where she ran into the arms of Jesus and loved ones... View Obituary & Service Information

The family of Wilma Jean (Johns) Gadd Eaton created this Life Tributes page to make it easy to share your memories.