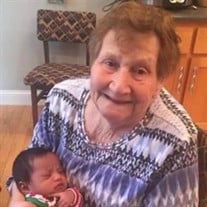 Wilma Bowling Nicholson of London, KY departed this life on Saturday, September 4, 2021 being of 90 years, 4 months and 17 days of age. She was the third and last child born to Ballard Bowling and Eliza Minton Bowling on Saturday, April 18, 1931. Wilma had two other siblings, Eula Bowling Webb and Bill Bowling (Ada Lee). She married Stanley Nicholson on May, 19, 1951 and they had three children: Donald K. Nicholson (Ellen-deceased) of Manchester, KY; Joe A. Nicholson (Vickie) of London, KY; and Jennifer S. Nicholson (Chris) of London, KY. Wilma was a dedicated employee for the Commonwealth of Kentucky and retired from the Cabinet for Families and Children in Manchester, KY. She loved her job and loved to work. She got to work early, had coffee made for everyone and brought the best food to share. Wilma was a phenomenal cook and was known for her big Sunday lunches and her gift for baking cakes. She was also so kind that it’s beyond describing in this obituary. Wilma was a dedicated member of the Providence Baptist Church in London, KY. Wilma as faithful in her attendance there until her body could no longer go. However, until her death she always knew Jesus’ name and called it as long as she could speak. Wilma is survived by her husband Stanley and her children: Don, Joe and Jennifer. Also surviving her are five beloved grandsons: Keith Nicholson (Kellie) of London, KY; Adam T. Nicholson (Sarah) of Manchester, KY; Kash Nicholson of Manchester, KY; Walt C. Woods of London, KY; Rhett S. Woods of London, KY; AND two wonderful great granddaughters: Josie Nicholson and Mary Kate Nicholson both of London, KY. Predeceasing Wilma were her parents: Ballard and Eliza; and her sister and brother: Eula and Bill. Funeral Services and Visitation for Wilma will be at the Providence Baptist Church, 7880 East Laurel Road, London, KY on Wednesday, September 8, 2021 after 11 AM with her funeral beginning immediately after visitation at 1 PM. Pastor Trent Pool of Providence Baptist Church will preside over the funeral. Pallbearers will be her grandsons and her two nephews Charles and Benard Webb. Arrangements are entrusted to the Rominger Funeral Home of Manchester, Kentucky. This obituary is a courtesy of London Funeral Home.

Wilma Bowling Nicholson of London, KY departed this life on Saturday, September 4, 2021 being of 90 years, 4 months and 17 days of age. She was the third and last child born to Ballard Bowling and Eliza Minton Bowling on Saturday, April 18,... View Obituary & Service Information

The family of Wilma (Bowling) Nicholson created this Life Tributes page to make it easy to share your memories.

Send flowers to the Nicholson family.